Jane Haakonsson, Land Officer of the Cayman Islands Government, pointed out that green iguanas are bad news, since they damage infrastructure by digging under roads, roads collapse and cause damage to human health

SANTO DOMINGO. -Dominican Republic is currently in a invasion process by the green Iguana. This species was introduced A while ago five decades approximately to the country and, at present, you can find naturally invading agricultural and forested areas.

"The Green iguanas are bad news, because they defecate in swimming pools, cars and cause damage to human health and the infrastructure, since they dig under roads causing collapse and are a extreme danger on the roads and mean an expensive delay in airports. ”

Following this problem, Jane Haakonsson, Land Officer of the Government of Cayman Islands, recommended to the authorities of the Dominican Republic establish a system of early response, monitor population or different subpopulations already established, that the authorities act intelligently and systematically, and find a solution that works for the country.

"Natural predators are insufficient and a correlation between the density of the green iguana and disturbed areas was identified in Cayman Islands, so it is necessary to find funds because it is a problem that will affect us all," Haakonsson said.

During the talk “Management actions on Grand Cayman Island: Controlling the Overabundance of the Green Iguana”, Realized thanks to the support of USAID-USFW in collaboration with Instituto Tecnológico de Santo Domingo (INTEC) and the National Museum of Natural History, the representative of the Cayman Islands government said that the green iguana was introduced to the Cayman Islands in the 1970 decade and was marketed as an exotic pet. 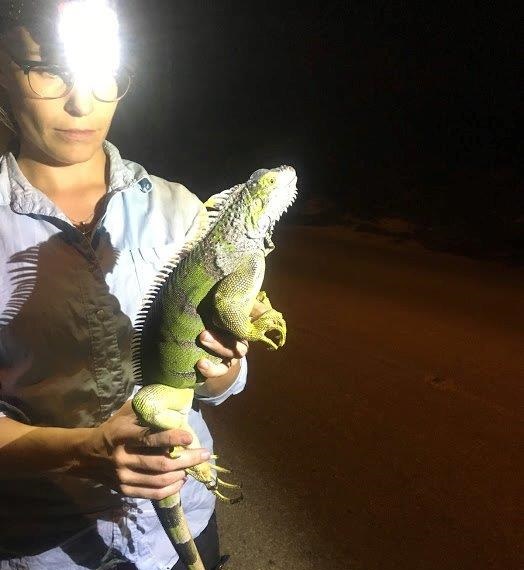 s from Hurricane Ivan impacting Grand Cayman on 2004 the observations of green iguana in the wild were few, however, when it was first monitored in 2014 the population was estimated at 254,162 iguanas, ”said Haakonsson, who noted that in the estimate annual of green iguanas held in Grand Cayman for August of 2016 was of 814,855 iguanas, and in the same month of 2018 the figure exceeded 1,319,939 iguanas.

The green iguanas cause damage to health and public safety, through the transmission of zoonotic diseasescaused by viruses, bacteria and parasites. "The risks to human health are caused by the presence of rotten iguanas following natural deaths in the invaded habitat, where they can disperse pathogens into the environment."

These disease risks are already present on Grand Cayman Island, where a new bacterial infection was recently identified causing death to the blue iguana, an endangered species. The latter places our two iguanas of endemic rocks at great risk.

"Green iguanas, in turn, are feeding on wild animals, such as bird and bee chicks, therefore, endangered bird species are at serious risk."

The Cayman Islands authorities they made management actions with the fundamental objective of minimize the abundance of green iguanas, using one or more control measures among them evaluate the logistics and costs of control efforts and evaluate the response of the population of iguanas to control.

"In Phase of control 4,370 green iguanas was removed, during 151 hours of hunting; in the second phase, it was deleted 14,468 green iguanas, for a total of 16 tons during 567 hours of hunting, and for the third phase carried out throughout the island were removed 29,000 iguanas".

The representative of the Environment of the Cayman Islands, said that to continue monitoring the population throughout the island, annual monitoring data will be used to model population dynamics using harvest theory and thus make better decisions to Update the elimination strategy.

In addition, systematic controls will be carried out, when the density is lower, district by district; Access to land will be used as an incentive, regulations for invasive species will be raised and their biosafety plan will be improved.