The meetings will take place virtually on May 12,18,21, 25, XNUMX and XNUMX and will feature national and international exhibitors on environmental issues.

SANTO DOMINGO. The Observatory of Climate Change and Resilience (OCCR) of the Instituto Tecnológico de Santo Domingo (INTEC) will develop a new cycle of virtual seminars on issues of environmental stability and adaptation to climate change, on May 12, 18, 21 and 25.

The meetings, which will have the participation of national and international experts, will be broadcast live through INTEC's YouTube channel from 9:00 in the morning.

The cycle starts on May 12 with the seminar "Air quality", which will be directed by experts Nicolás Brehm, Environmental Engineer and director of Tecmalab, Dominican Republic; Daniela Castro, in charge of Air Quality Monitoring at Tecmalab, Dominican Republic; Anderson Huayna, Chief of Air Quality of Lima, Peru and Laura Herrera, collaborator in the Early Warning System of Medellín, Colombia (Siata). 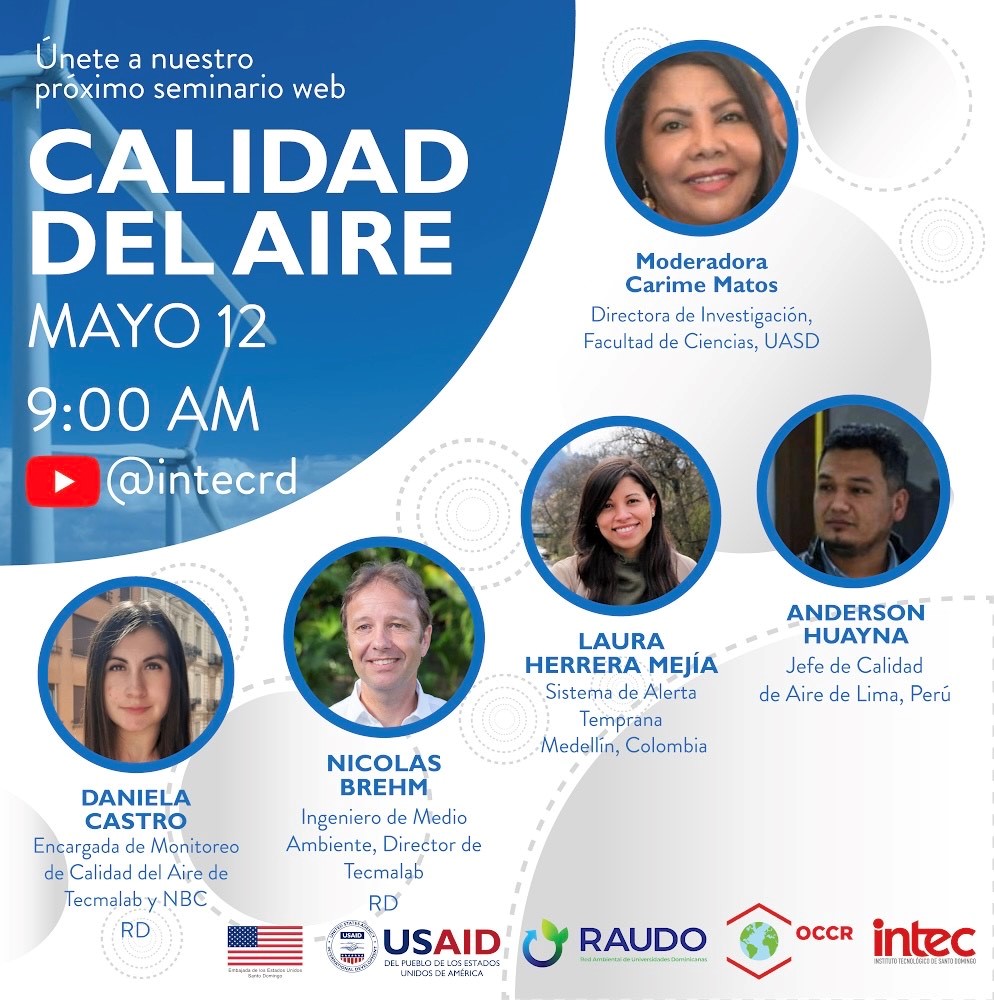 The second meeting, "Benefits of urban green infrastructure for mitigation and adaptation to climate change", will be on May 18, and will be in charge of Elvia Meléndez-Ackerman, professor at the College of Natural Sciences of the University of Puerto Rico; Gilkauris Rojas, Dominican research professor at the School of Architecture and Urbanism and Wilmer Barreto, academic and researcher at the Department of Geology and Civil Works at the Catholic University of Temuco, Chile.

The seminar will be held on May 21 "Territorial Ordering and Local Planning", that proposes the integration of information and geospatial technologies for the municipal territorial ordering of the Dominican Republic, as well as the ordering of water resources in the municipality of Turrialba, Costa Rica.

The following specialists will be in charge of this conversation: Bolívar Troncoso, director of the José Joaquín Hungary National Geographic Institute in the Dominican Republic; Gregorio Rosario, president of the Sustainable Community Development Foundation, Inc. (FUNDESCO) and Laura Benegas, coordinator of the Watersheds, Water Security and Soil Unit of the Tropical Agricultural Research and Teaching Center (CATIE) in Costa Rica.

With the virtual event "Solid Waste", to be held on May 25, ends the series of virtual seminars presented by the OCCR. This meeting will address the analysis of urban solid waste recycling costs and advances in municipal solid waste at the metropolitan level. This meeting will be defined by Vicent Decap, Suez's commercial director in Latin America; Elvira Avila, a public official in the metropolitan municipality of Lima, Peru, and Tania Bishara Bravo, an execution engineer in bioprocesses at the Ministry of the Environment of Chile.

The Observatory of Climate Change and Resilience (OCCR) is the first climate change observatory in the Dominican Republic and functions as a knowledge platform that contributes to the analysis, evaluation and adaptation to climate change and its interrelation with other sectors of society.

Based in the Instituto Tecnológico de Santo Domingo (INTEC), researchers and academics can use this information channel and access its free resources, available on the portal: https://infoclima.intec.edu.do/ to develop studies on issues related to climate and strengthen national, local and individual capacities.