GO TO THE Virtual Campus

Dr. Norberto Rojas gave a lecture on the Sciences of Structural Engineering and Earthquake-Resistant, in which he recommended the formulation of an urban plan in the Dominican Republic

SANTO DOMINGO.- The Hispaniola Island es highly vulnerable telluric movements. In 2010 an earthquake measuring 7.3 on the Richter scale devastated much of the Haitian territory and left an estimated 300 dead.

Might Dominican Republic, located in the eastern part of the island, suffer the occurrence of an earthquake of equal magnitude. On that subject we talked with the doctor in structural engineering  Norberto Rojas.

What are the data that seismic engineering offers civil engineers to better build buildings?

La seismic engineering has developed as a branch of engineering that study el efecto of the earthquakes in the civil infrastructure , as a to mitigate o reducir that damage due to this phenomenon. It encompasses multidisciplinary efforts from various branches of science and engineering (geology,seismology, geotechnics, Structures engineering, etc.) whose main objective is to design, build y maintain structures which resist that earthquakes safely and in full compliance with design and construction regulations.

What is the probability that a major earthquake will occur in the Dominican Republic in the future?

The island of Hispaniola is located on the edge of interaction between North American plate and plate of the Caribbean, which causes a subduction zone. This causes the whole island to be considered as high seismic risk. In addition, inside the island there are 13 geological faults , which according to experts have the capacity to generate earthquakes de magnitude seven And older. 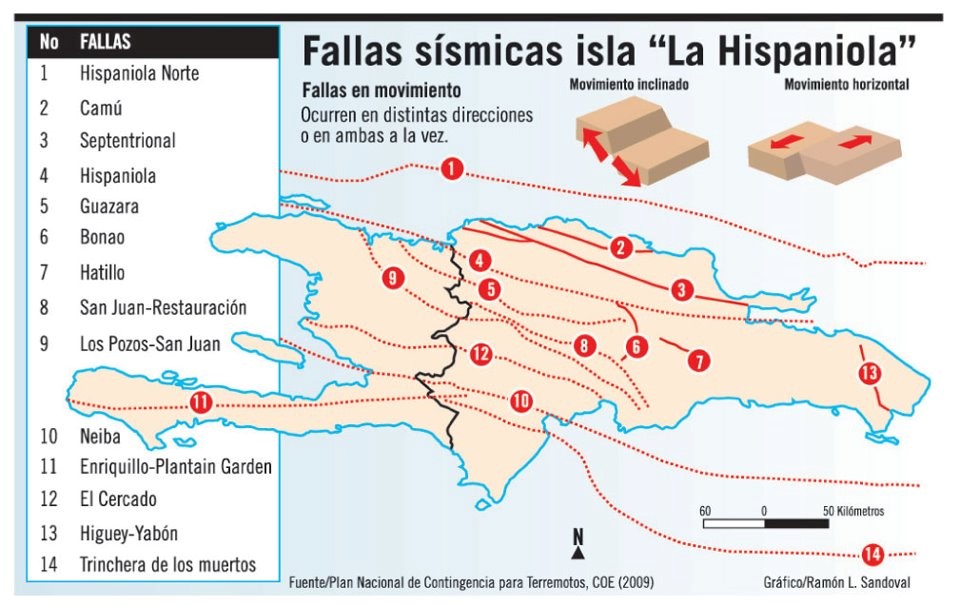 If we look at the record of the main seismic events that occurred in Hispaniola, it can be concluded that at any time an earthquake of magnitude greater than seven can occur and therefore, the probability of the occurrence of an earthquake in the eastern part of Hispaniola (Dominican Republic) is very high.

What are the regulations that architects and engineers must abide by when building works such as schools, shopping malls, hospitals, government offices and others to which several people have access?

La regulations in force in the Dominican Republic for the design of earthquake-resistant structures is the Regulation for the Seismic Analysis and Design of Structures R-001, promulgated under Decree number 201-11 of the 2011 by the then president Leonel Fernández Reyna. Said regulation establishes the minimum requirements that any building must meet to be considered earthquake-resistant.

In the Dominican Republic, have measures been taken to adapt civil buildings to the seismic risks that the island has?

Yes. Currently the Ministry of Public Works and Communications requires that any "new" structure to be approved for construction purposes, must deposit in that agency documentation with which it can be validated that the structure meets the requirements of the seismic code.

In addition, for existing structures that are going to be subjected to improvements and that do not have construction plans or previous license, the Ministry requires a complete structural evaluation that includes a series of tests and trials with which it is validated if the structure is suitable for resist seismic loads according to current regulations. If not, said structure must be reinforced to make it "safe" according to the regulations.

What are the most vulnerable areas to earthquakes in the country?

If we consider that Hispaniola has an area of ​​about 72,000 km2 and the number of faults we have both inside and outside, we would have to conclude that the entire island has a high seismic risk.

What can be done to stop the construction without measures, regulation and control that citizens build, mainly in urban areas?

To stop constructions type informal or illegal, there must be more supervision by the State or its dependencies, as are the municipalities. In addition and for me the most important thing, make aware to citizenship of riesgo It represents a structure that is not designed and built by trained engineers.

Does the country require a national urban planning plan and why?

Of course. This because it is necessary classify the territory based on soil type, which has proven to be one of the main factors influencing the good or bad performance of structures during earthquakes around the world. In turn, it is necessary to establish zones in which, for example, the maximum number of floors per buildings, etc. is controlled.

What capacities will the graduates of the Master of Science in Structural and Earthquake-Resistant Engineering show?

The graduates of the Master's in Structural Engineering and Earthquake-Resistant INTEC are professionals with a high degree of sensitivity and social responsibility, a great work ethic, with a solid training for the Insights and above all oriented to the solution of structural problems.

This program has focused on developing a professional with a solid ethical training y oriented to the research that will allow you to face complex structural problems and solve them successfully. In addition, the master's graduate will have the following skills:

This master's degree is the first fully virtual program in Structural Engineering and Earthquake-Resistant in Dominican Republic y Latin America. Among the benefits that your students can count on are: